What information is held on the Wiki-Solar Database?

For each of the projects referred to on the right, we collect as many of the details listed below as we can. We don't have it all, so if you can update us with further or corrected information, please let us know.

Each project is given a name, often by its owner, failing which we usually use the name of the nearest village (supplemented by participant names and capacities where there are several projects nearby).

We assign a unique reference to each one to help avoid duplication (as different parties may refer to the same project by different names).

The Wiki-Solar Database record the rated capacity of the station in MWp (the DC output of the solar array) and/or in MWAC (the capacity deliverable to the grid). See more about MW ratings here.

Once a site appears on satellite views or other images, the site area considered is that within the (fenced) site perimeter. Prior to that it is the area quoted by the developer or referenced in the planning documents.

In addition to the capacity data above, key technical data on each project includes:

The Wiki-Solar Database lists as many of the following participants as possible - follow hyperlinks to see the role of each: Plant owner, project developer, EPC and O&M contractors, solar module and inverter suppliers, landowner, power off-taker and finance providers.

More recently we have been collecting information on the capital costs of the projects and, where available, the proportion of this provided by debt finance. The finance providers are included in the participants above.

The Database often holds a url linking to the owner, developer or funder's details about the project. We also have photographs of many of the plants, when they are built.

A summary of the total number of projects on the Wiki-Solar Database is given here.

There must be some utility-scale plants we don't have - if you know about any, let us know.

When you click on any of the sites on our maps, a placemarker appears showing which items of the information shown on the left is available for that plant - see the right of this page. 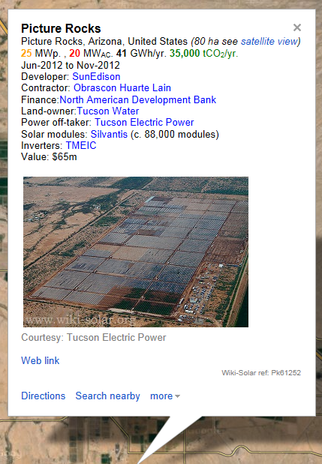 Maps and analysis are based on our database of more than 2,000 utility-scale solar projects - the world's most comprehensive.