Our site footprints give more precise data (where available) about the area covered by each solar power plant. For established projects this is obtained from satellite imagery. Otherwise, and for projects in development, it may come from site plans, photographs or planning submissions.

What area do we include?

In general, the site area shown is all that is enclosed within any perimeter fencing for the project. Rooftop projects indicate the outline of the roofs on which they solar arrays are mounted. Unfenced ground mounted projects show the area of the solar arrays plus a surrounding border, to allow for the area are likely to be required for maintenance access.

Where plants are directly connected to separately fenced transmission stations, these are normally excluded from the indicated area because such substations are often under the management of the network operator rather then the solar plant.

Because we typically show the entire fenced area, some projects may have a larger footprint than is strictly necessary for the solar generating station; for example if fencing is taken around ponds or woodland within the project area.

For simplicity, wavy or crooked boundary lines may be shown as straight lines on our maps. To avoid complexity in some cases where roads, paths, streams, power lines and other features cross solar sites, these may be included in the indicated site area, even when they are fenced separately.

All of the maps in this website are displayed using cartography and satellite images from Google Maps.

Google regularly updates its satellite images, but the frequency with which this happens varies in different parts of the world. There may be some instances where solar generation stations have been in existence for several years but still do not appear on the satellite images.

Which projects do we show?

Wiki-Solar's aim is to show site footprints of all projects on our Database for which they are available. .

We also show some other plants, such as:

where these are geographically close to utility scale solar projects in the Wiki-Solar Database.

Because Google Maps uses different images at different magnification levels you may sometimes need to zoom in or zoom out to see the solar project on the map.

Some site footprints have been captured from satellite images from providers other than Google. These may not yet appear on Google Maps, but probably will if you return in a few months time.

Some projects may be captured during the construction stage, and you may need to return later to see the completed installation.

A few solar power plants have been configured to show specific shapes, when viewed from above. See some examples here. 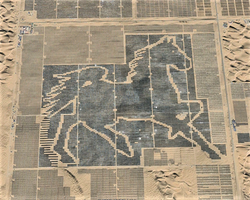