What do we mean by owner?

The owner is the entity which owns the solar power plant once it is in commercial operation.

Owners are typically independent power producers (IPPs) or infrastructure funds, often with a number of solar power stations - sometimes as part of a broader renewable of general energy portfolio. Sometimes traditional energy utilities* also own solar generating stations, as do some community groups and property owners wanting to use the power produced.

Some project developers retain ownership of projects they have developed, either for the long term, or pending sale to a new owner.

The owner is responsible for operating  the plant, and usually appoints an O&M contractor to oversee its technical performance. Normally the owner is also the selling counterparty in a Power Purchase Agreement with the power-offtaker, and the recipient of any other benefits, such as feed-in tariffs.

The data used for the analysis and the table on the left is derived from operating projects of 4MWAC+ according to these criteria.

The plant owner is known for some, but not all, of the projects on Wiki-Solar's database. Therefore, as noted below the table some figures will be under-stated. However, several of the leading participants confirm details of their portfolio to Wiki-Solar (and you can too - see the bottom left of this page).

Some owners in this list also fulfil other roles in utility-scale projects. The figures quoted here apply only to operating plants of which they are the owner. Where companies have maps, however, these will show all their projects.

The most recently published list of leading utility-scale solar plant owners is shown below.

This shows the situation in late 2022. 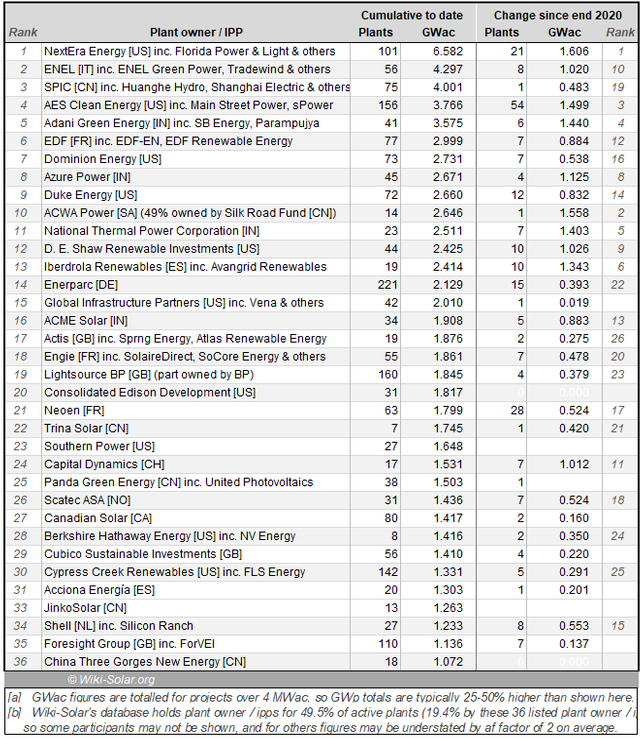 Some of these are independent power producers (IPPs) rather than traditional energy utilities; see utility-owned solar projects map here.