There can be advantages in grouping together several technically separate solar generating stations into clusters in a single location. We call these groups of plant 'solar clusters', because the expression 'solar park', which some people use can be confusing, as many individual power stations are also called solar parks. 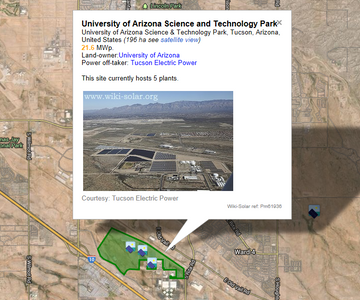 One benefit of grouping solar power plant in this way might be to share the infrastructure and costs of the grid connection.

In some instances regional environmental assessments (such as those that led to the US administration's 'Competitive Renewable Energy Zones') or landowners might identify large parcels of land, which would be too extensive for a single project on its own.

Solar parks in our Database

Use the pull-down menu above, to see the site plans of leading solar parks around the world. In addition to those already established, others are under development, including: